We were off for a small tour today. You know how we seem to keep going out and finding great places for coffee? Well, we found another one today. Check this out!! 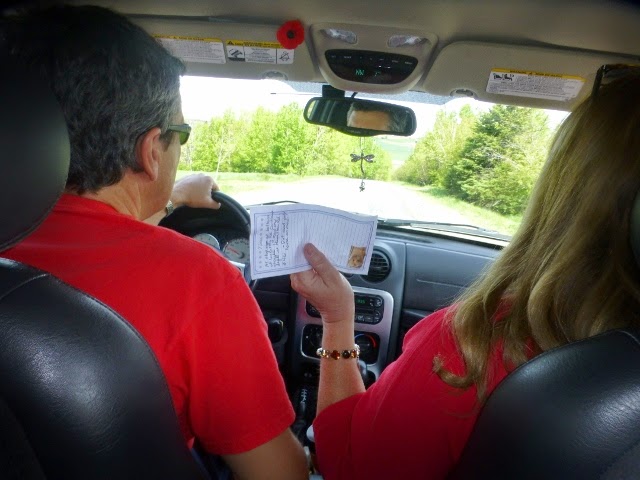 Pilot and co-pilot in control!! 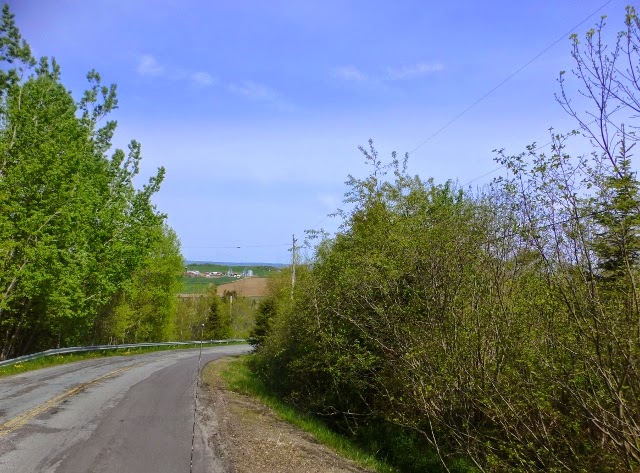 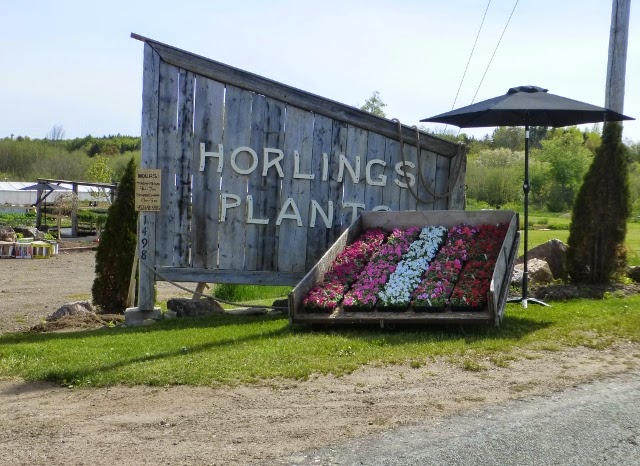 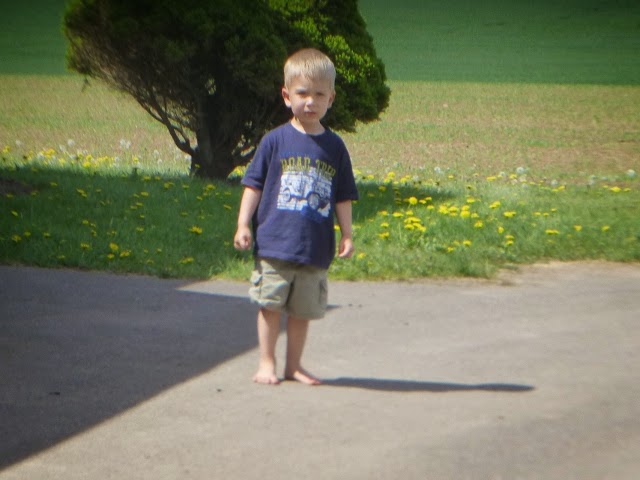 The head of the greeting committee!!! 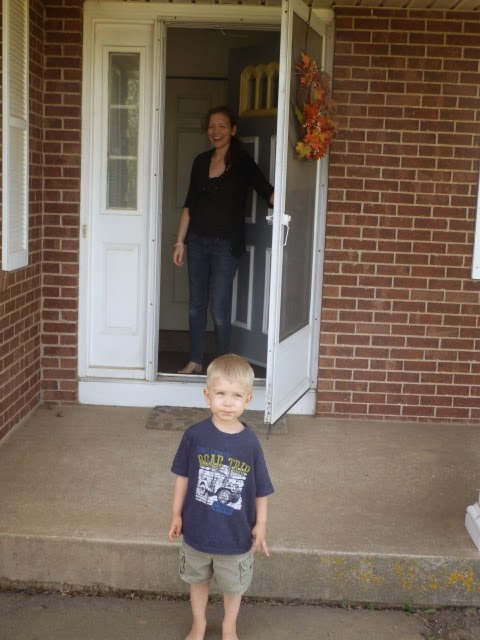 ....and Mom too!!
Paula arranged for all of us to have a nice visit with Lindsey, Cameron and Sadie Corkum. Just who are these people some of you may ask? Why, Lindsey is Kevin and Ruth's daughter along with their grandchildren, Cameron and Sadie. Lindsey treated us to some yummy blueberry muffins and  fresh fruit and ice tea. We had a great visit but it just wasn't long enough!! 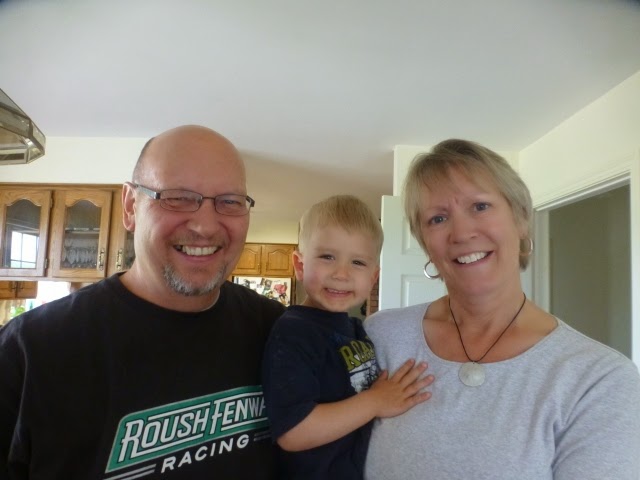 And since we were missing Gus so much,
we had to get some hugs from Cameron!!! 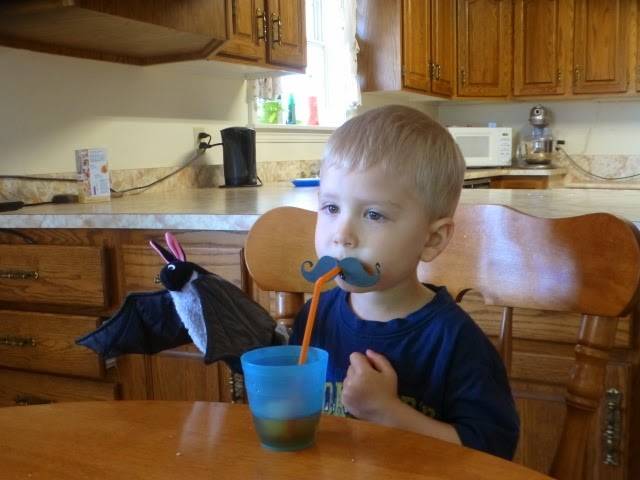 Paula brought along treats for Cameron. He looks
pretty good with that mustache straw and bat, don't you think?? 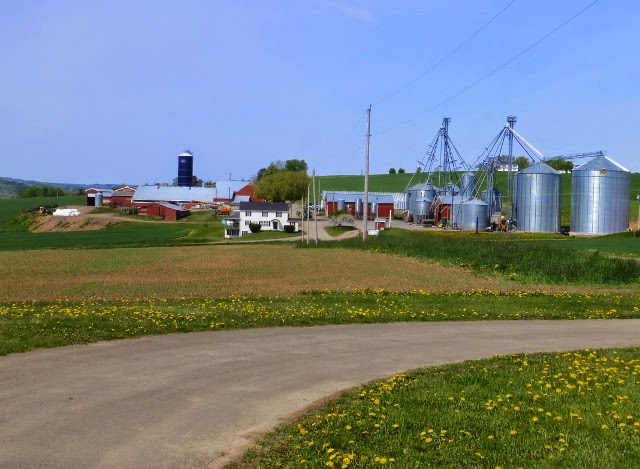 Lindsey and Justin, Cameron and Sadie live right on the
edge of a nice farm. Lots going on there and Cameron loves it!! 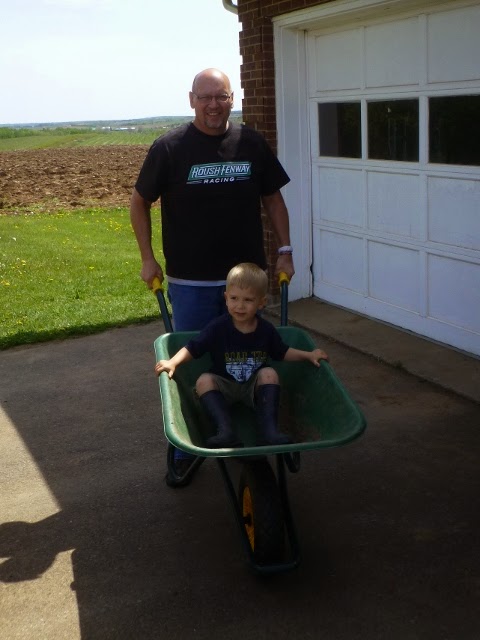 Okay, a little "tear around the yard in a wheelbarrow" time with Doug.... 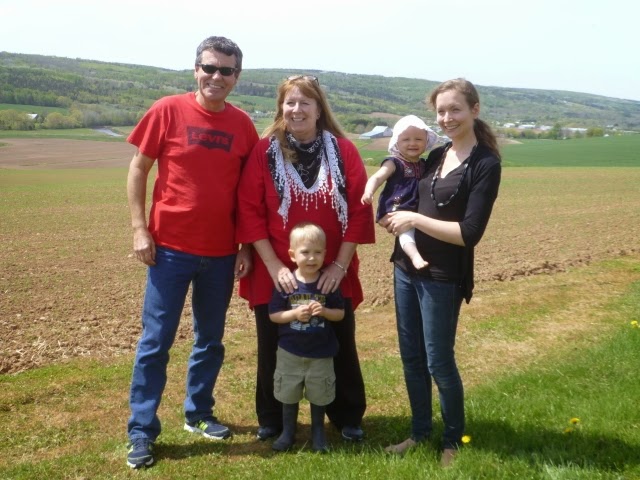 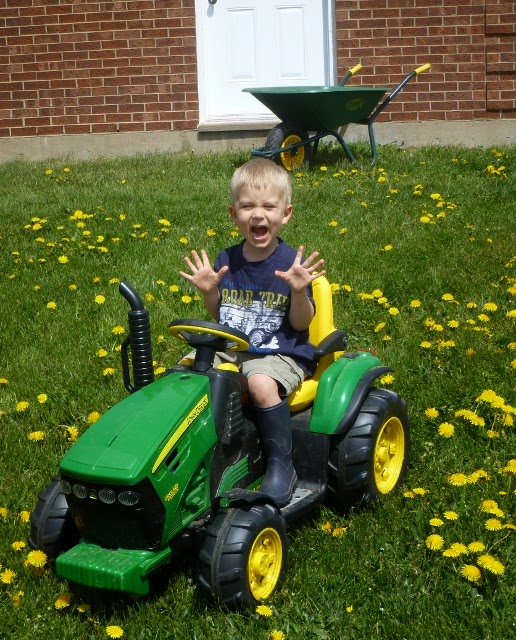 Cameron is busily practicing his tractor driving skills
because they are going out to visit with Kevin and Ruth in a
week or so.....Grandpa DOES have a tractor out there too!! 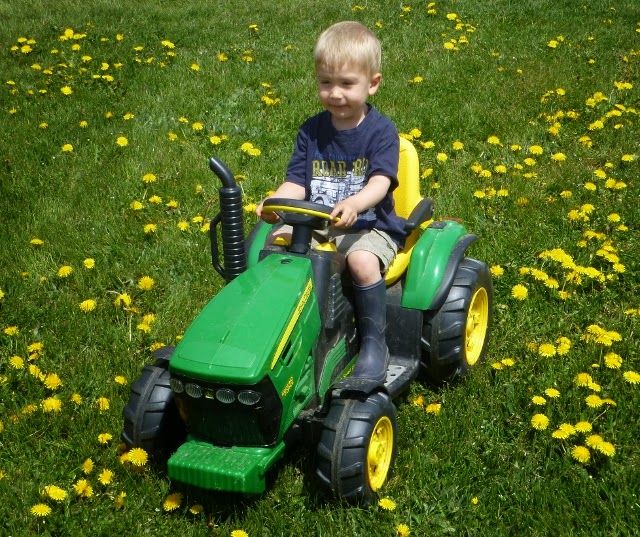 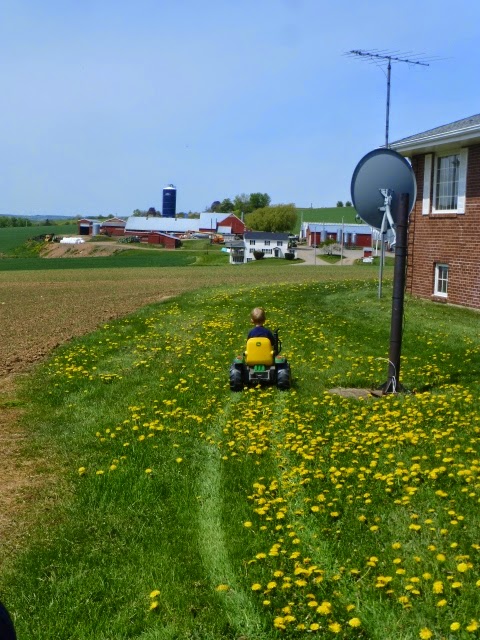 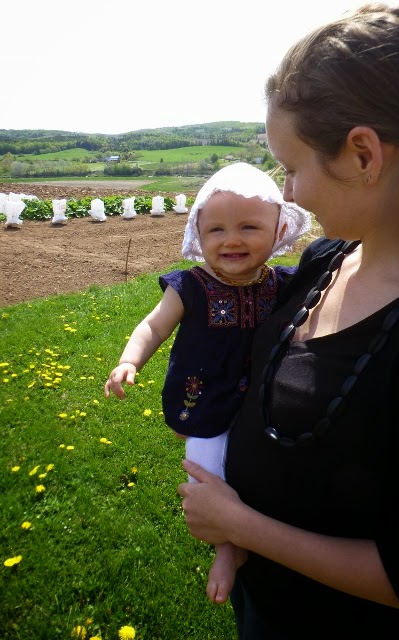 Sadie is an absolute little doll....
Anyway, thanks so much to Lindsey for having us. It was so nice to finally get to meet her and the kids. We have certainly heard lots about them!! I know how much Kevin and Ruth are looking forward to seeing them very soon!!!
After this it was off for another little circle drive. We ended up in Wolfville and visited at the Acadian Church there. There is SO much history here about the Acadians being expelled from the area by the English. I would like to read more about it..... 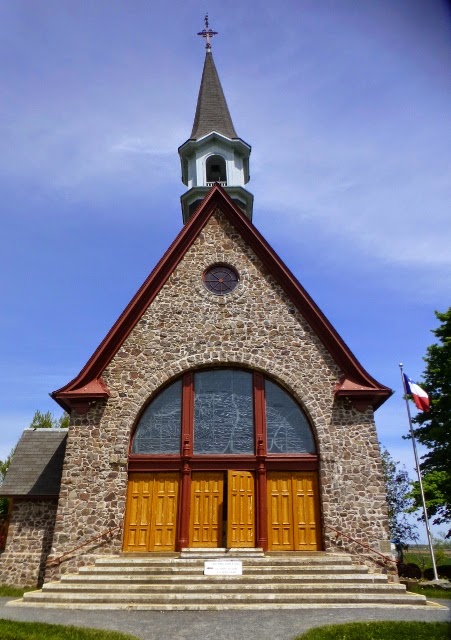 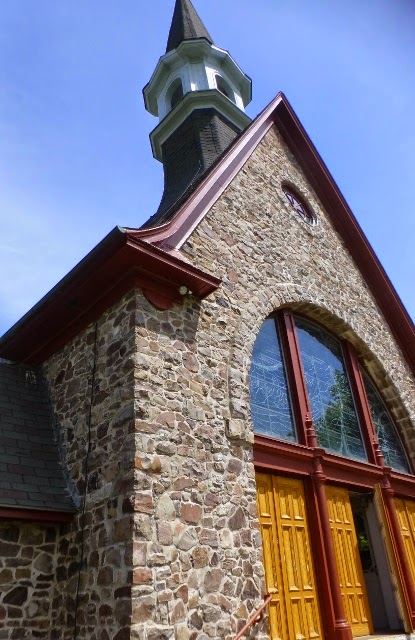 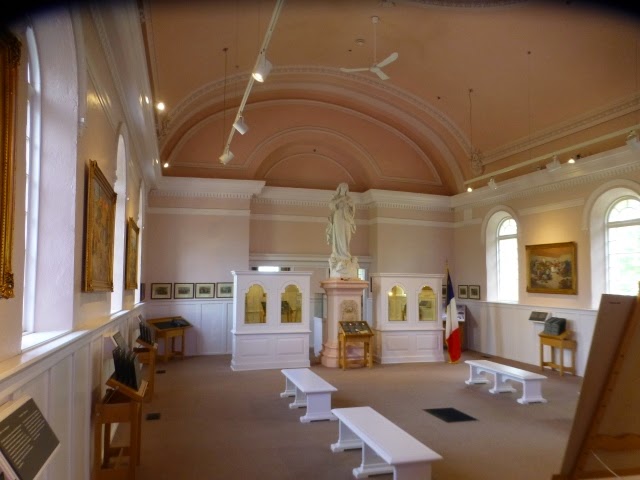 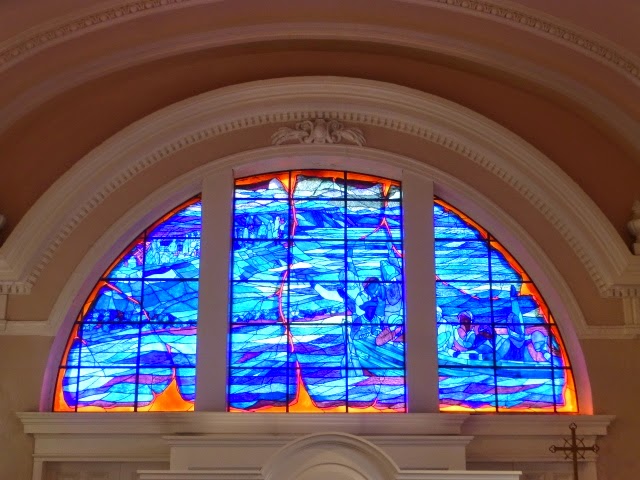 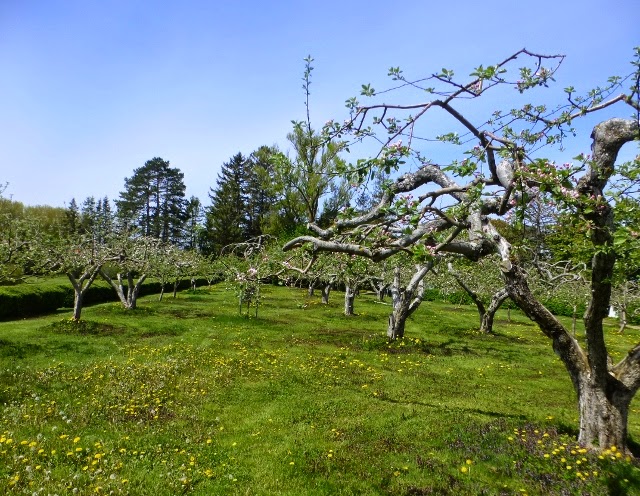 Apple trees on the church property.... 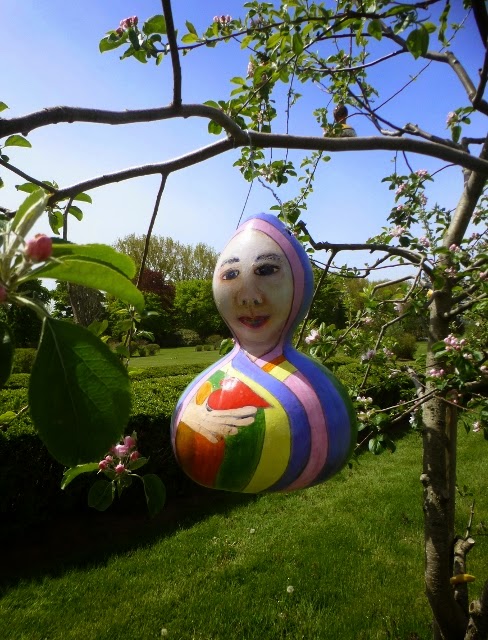 Grand-Pré was founded in about 1680 by Pierre Mellanson an Acadian settler who traveled east from the original settlement at Port-Royal. Pierre, an Acadian of French Huguenot and English extraction, had arrived in Port Royal with Sir Thomas Temple in the 1650s when Acadia was under English control. The fertility of the soils and wealth of other resources in the area had been known to the French since the early part of the century. The settlers quickly employed their dyke building technology to the vast salt marshes; effectively reclaiming several thousand acres of productive farm land. The farms and the population grew quickly, making Grand-Pré the principal settlement in Acadia. Settlements spread from Grand-Pré around the Minas Basin, collectively becoming know as Les Mines or Minas after the copper deposits surveyed by De Monts at the entrance to the Basin. By the mid-1680s the population was sufficient to support a church and the parish of Saint-Charles de Mine was formed.
The community was made famous by Henry Wadsworth Longfellow's poem Evangeline and is today home to the Grand-Pre National Historic site. On June 30, 2012, the landscape of Grand-Pré was
named a World Heritage Site by UNESCO.
And there you have a little history of this area. MUCH more to learn for sure. Time to crack out those history books, kids!!
After this, it was off to the TOP of Look-off,  a bluff area nearby. Apparently, many people come here to get engaged!! 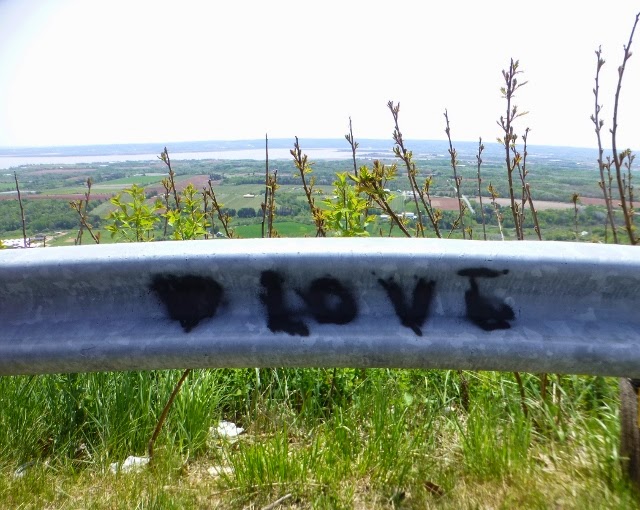 ...and someone has even tried to spell it out!! 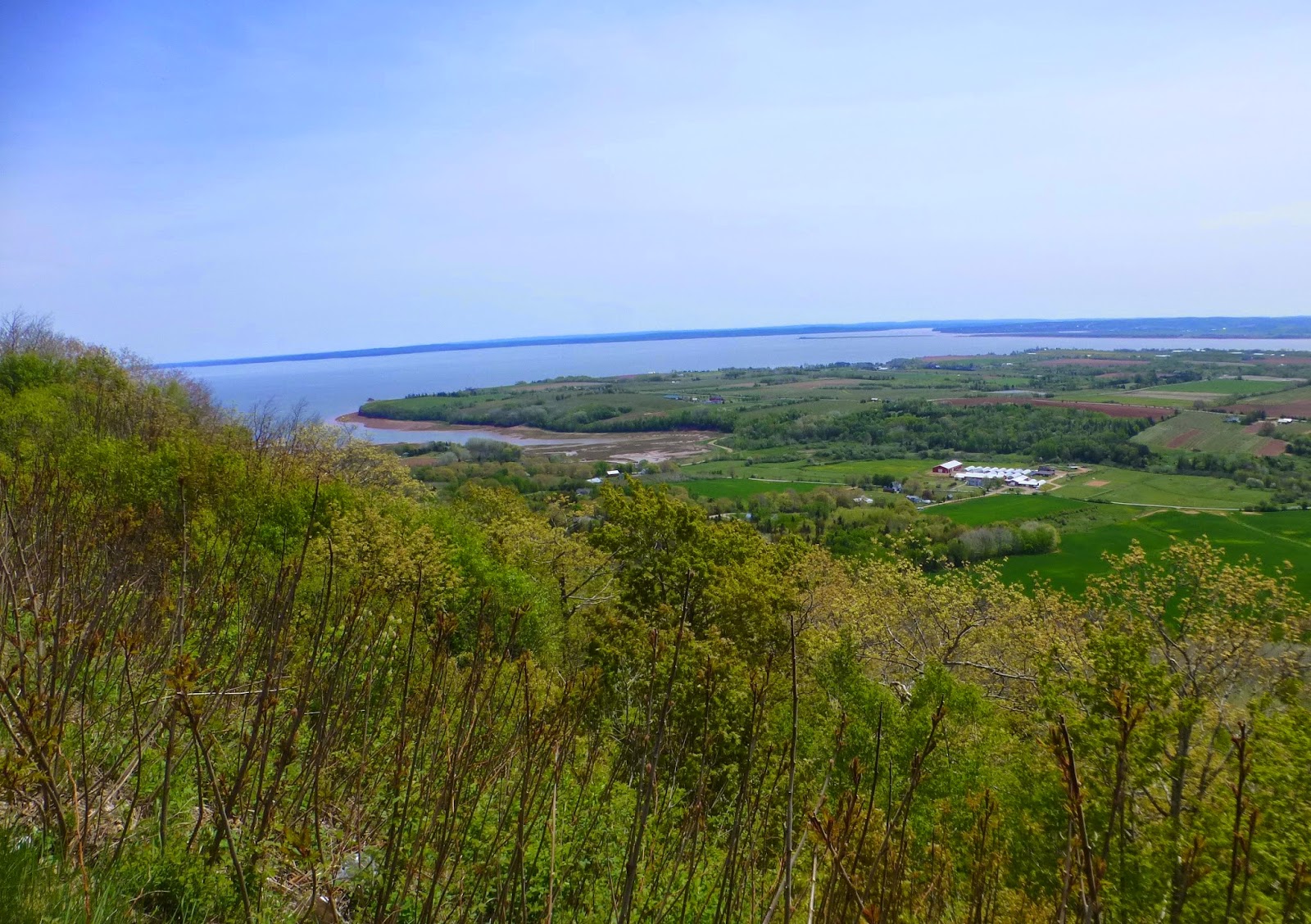 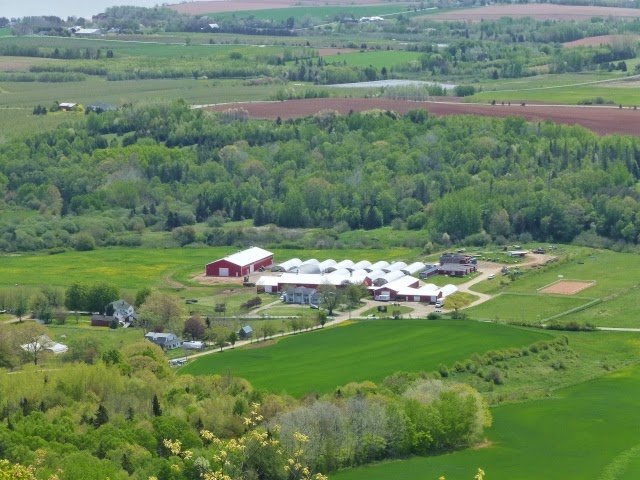 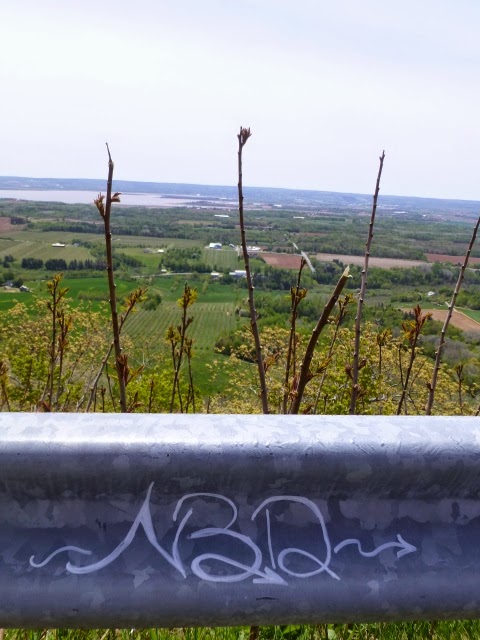 ...and then what do I find but our initials further down on the
guard rail...."NBD" Nancy - Beglaw - Doug. I thought
Paula had come up here and put them on there!!
Another great day, especially getting to meet Lindsey, Cameron and Sadie! Thanks again, Lindsey for the muffins!!
Tonight we are off to see Ron Hynes. He is a folks singer-songwriter from Newfoundland, playing in a small local venue. Our favourite type of entertainment!! I will let you know all about that in the morning!!
Peace....
Thought for the Day: I wish my eyes could take photos
Posted by Doug and Nancy at 13:09