Happy to say that we woke up to sunny skies and that really motivated us to get out of here to do "something". Oh my gosh, if we sat in the van in rain for a second day, I am not sure what would have happened!!!

We headed over to the beach again for a nice long walk. It was especially nice as it was about 22 C (72 F). We walked about 3 miles on the beach (round trip)...checking for shells and interesting bits of sea life. Check out our walk. Better yet, come along with us!! 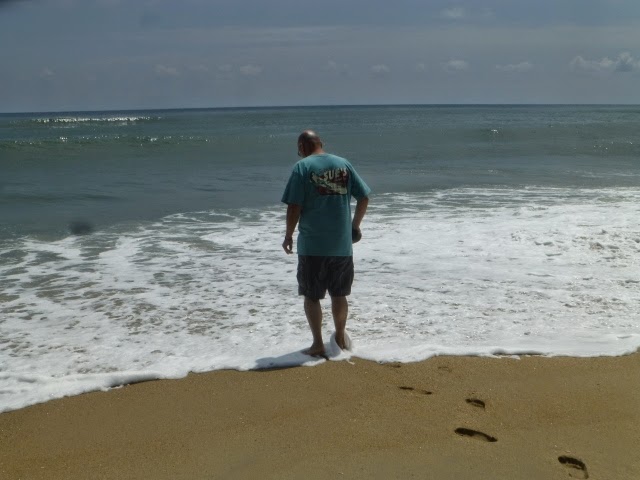 Doug checking out the water temps. Not too bad!! 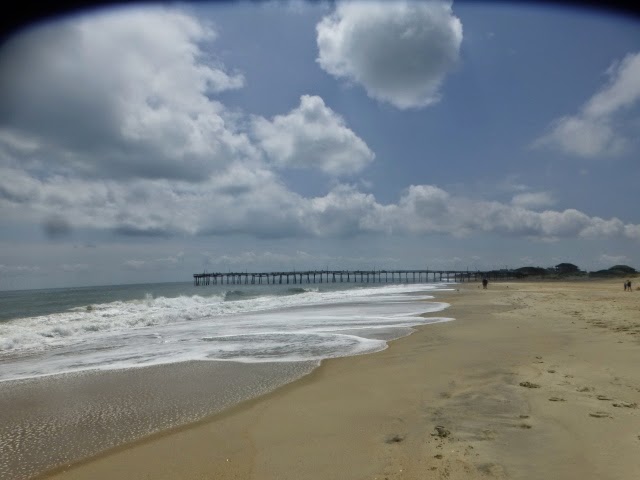 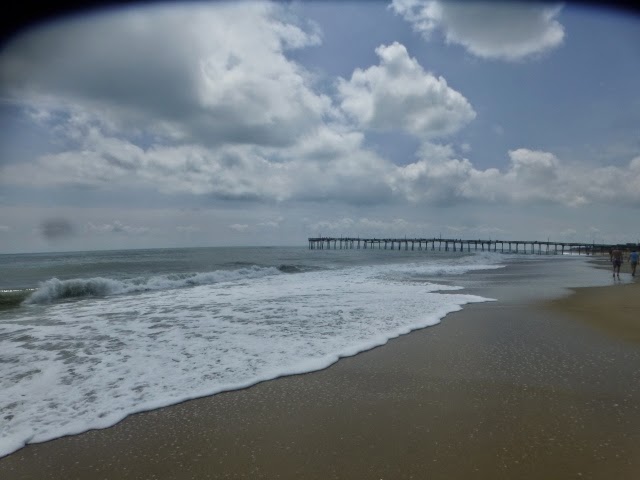 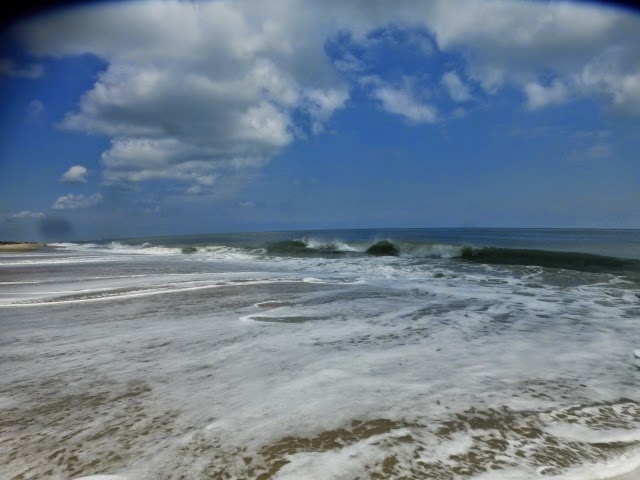 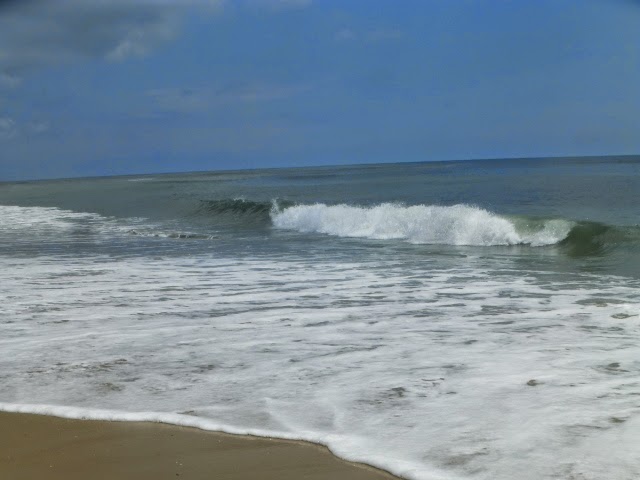 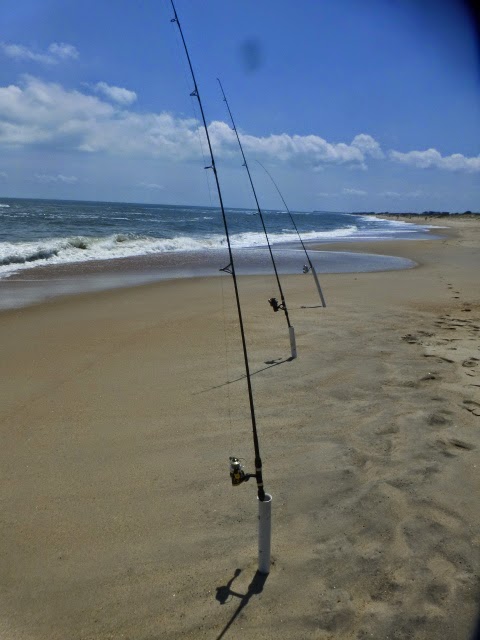 Typical surf fishing get-up. I think most of them go to
McDonald's for dinner!! But, that's fishermen for you!! 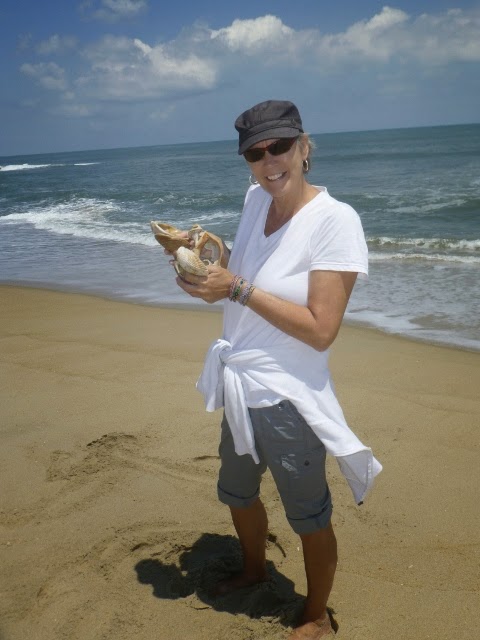 Once again, Nancy leaves the beach with some AWESOME shells!!
So as we walked back, we saw a group of guys pulling in a pretty big "fish". Turned out to be a small thresher shark. When one of them ran and got his knife and ran towards the shark I told Doug..."I can't watch" but then it became obvious that they weren't going to hurt the shark. They were saving it!!
See, the shark had got himself all tangled up in heavy fishing line, multiple times over. It was all tangled up around his fins and all over his head. Some of the line had actually cut into his fins. There was also the hook in his mouth from their attempts at surf fishing.
So, the group of guys went to work to free him from his entanglement. We were SO impressed. Of course, the shark was not aware of their attempts to help him and he continued to thrash around and try to bite them. They were pretty successful in getting everything cut off of him. They figured that he weighed about 30 lbs. 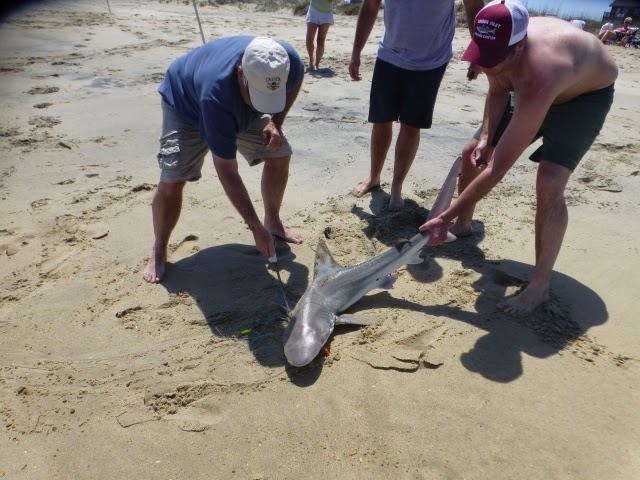 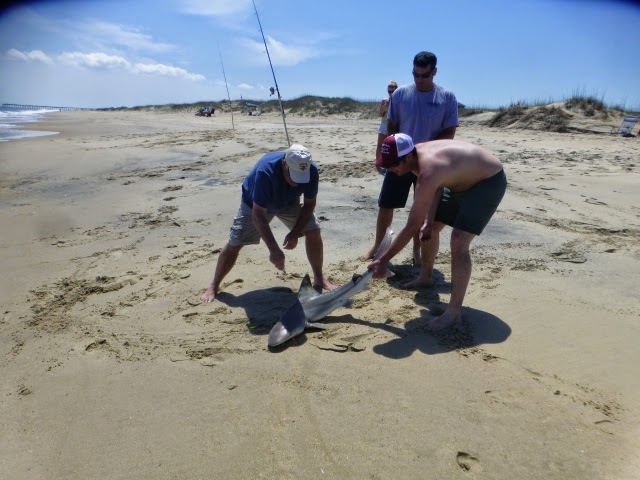 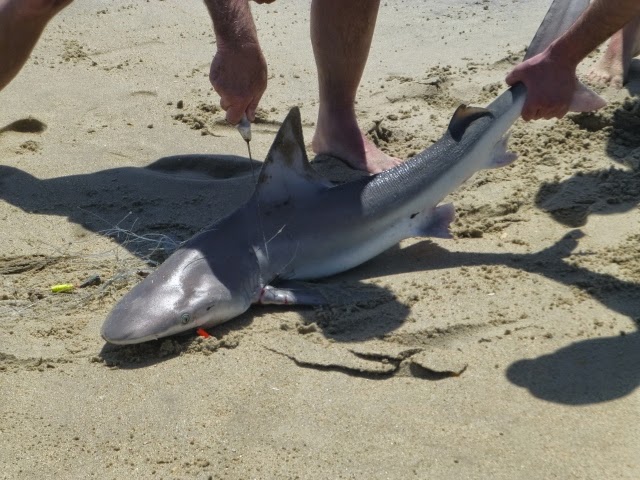 See the hook on his lip? The fishermen told us that the hook would actually just
disintegrate with the salt water and it was not going to be a problem for the shark.
Guess he will be in style with a pierced lip!! 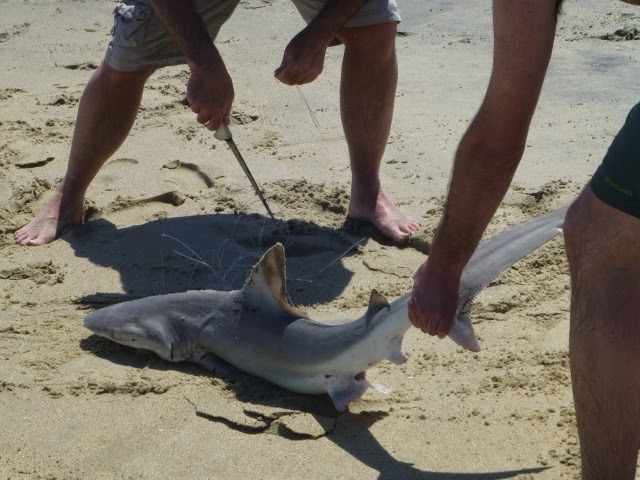 It kept flipping around. Too bad he didn't know they were helping him!! 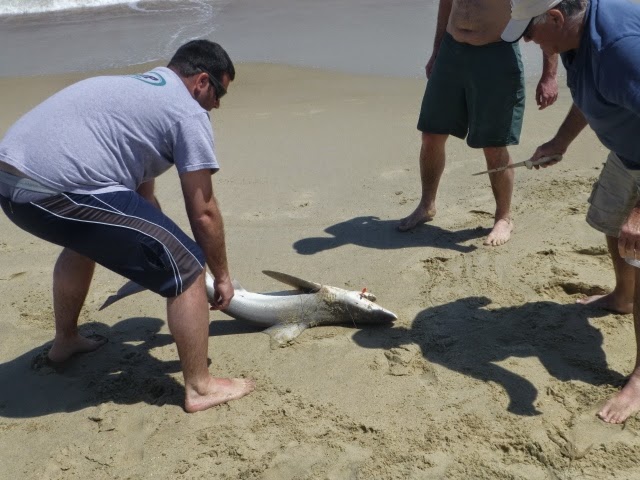 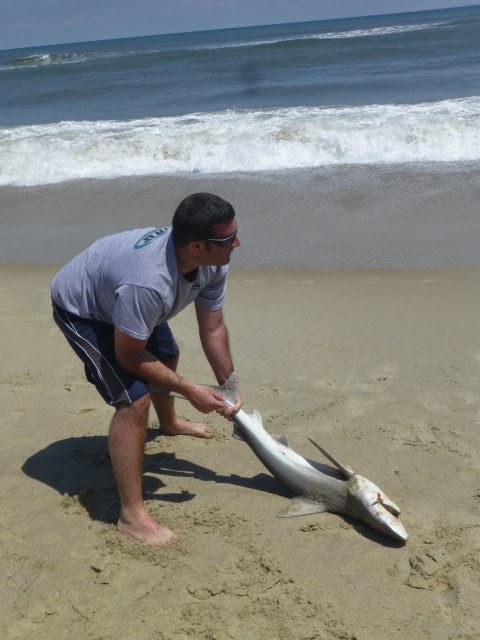 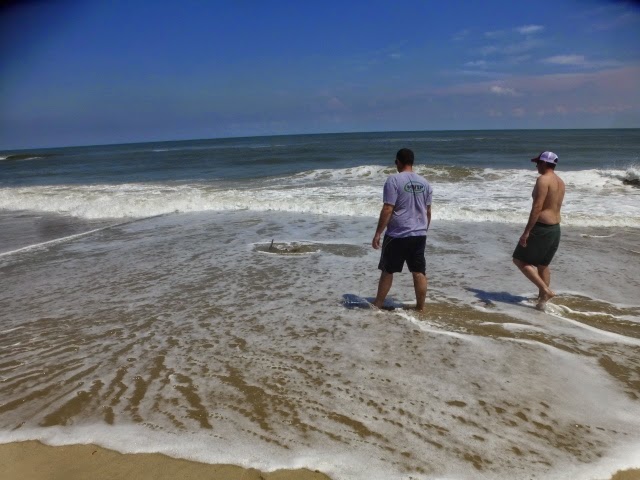 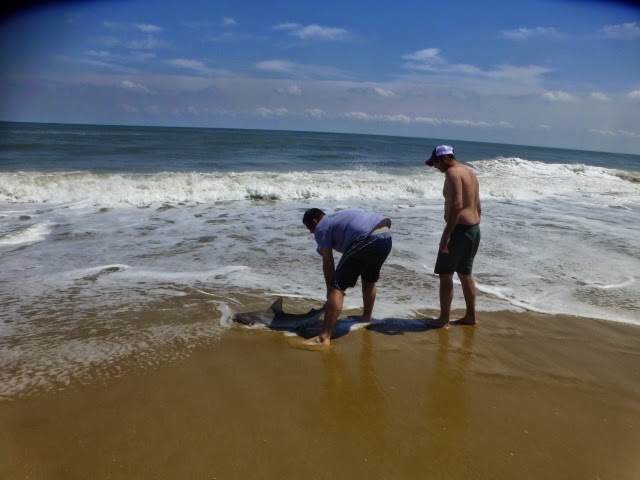 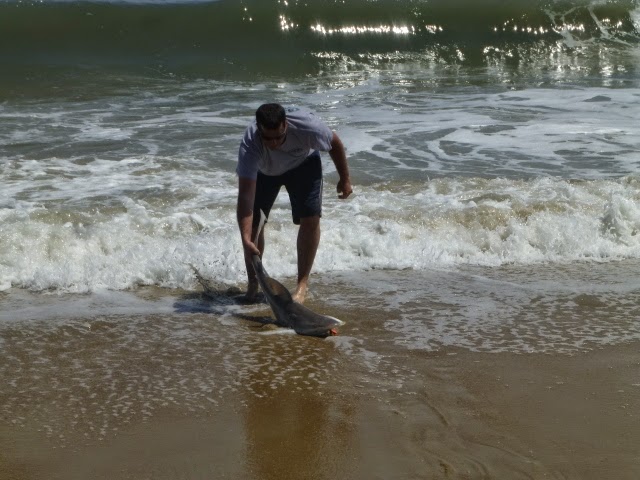 He took one last "fling" and the shark was gone.
We were so happy with this group of guys for taking so much time to help this one sea creature. Good to see that people really do care about helping. Way to go men!!
Here are a few pictures of the dune/house area where we entered the beach. 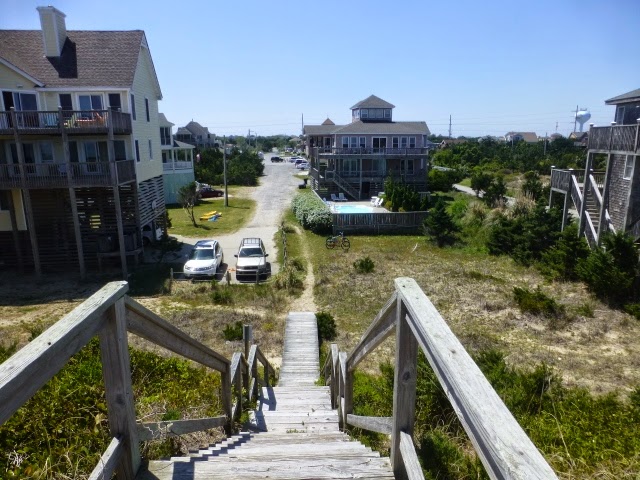 Our bikes are parked way down there.....to the right of the path. 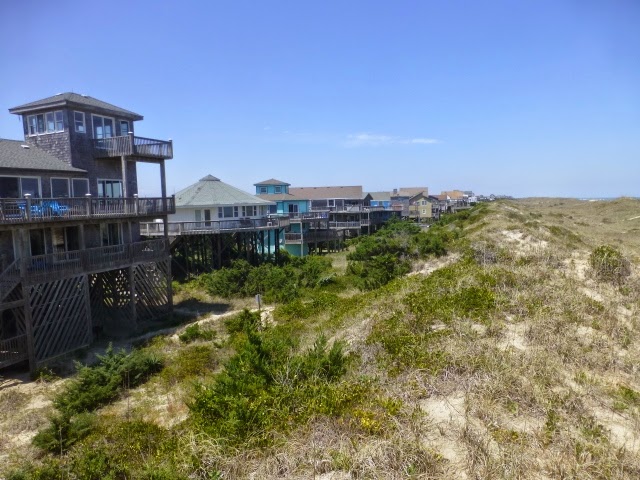 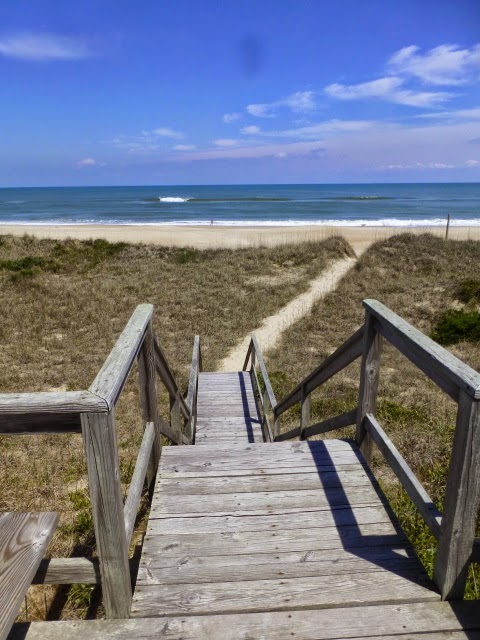 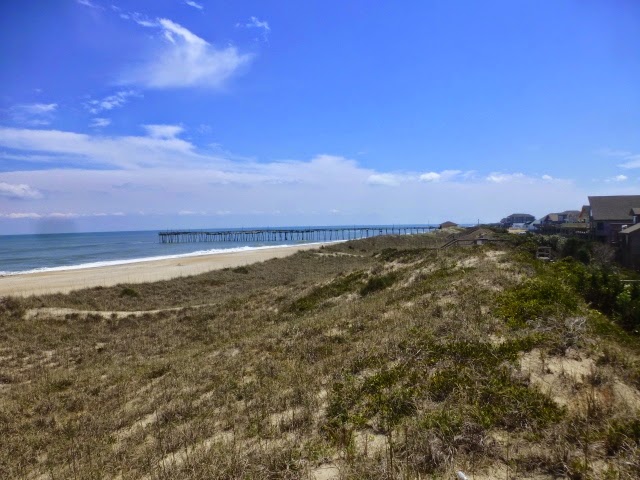 The county is very protective of the dunes. They are all that keeps the
sea from the land. You need to protect them!! Don't walk on them.... 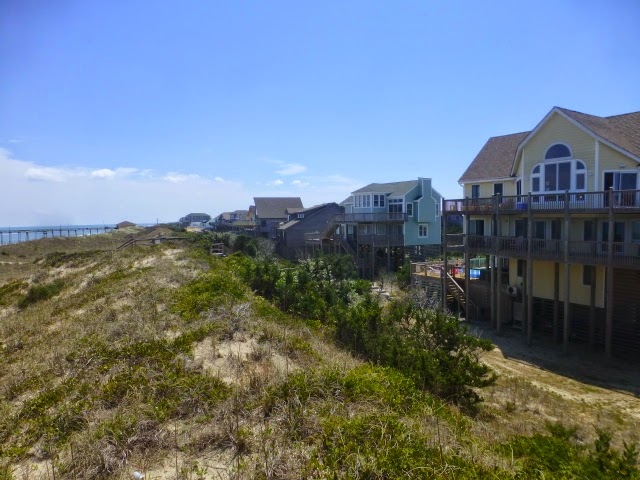 After this beach afternoon, we rode about 8 kms (round trip) to get a few groceries. Love riding here on the sidewalks.
Well, that's it for our stay here. A few loads of laundry (I know it NEVER goes away) and we will be out of here tomorrow morning.
Tomorrow's travels will find us into Quinby VA at Virginia Landing RV Park. Look it up on a map. It is in a pretty neat area about 192 miles north of here. Should be wifi.
See you all then. Have a happy Saturday!! Pork roast is almost done on the bbq!!
Peace....
Thought for the Day: May you always have a shell in your pocket and sand between your toes......right, Josh?!!
Posted by Doug and Nancy at 16:34