Well, it seems like it has been a long time coming.....Christmas, I mean!! Well, actually our departure date is looming, once again as well.

We will be leaving Nanaimo on Saturday, Dec. 21st. We will stay in the Vancouver area until about Monday, Dec 30th and then we will start our trek southbound. Pretty excited!

We have been busy this week, getting Euri ready for travel. Doug had him in for an oil change, tune-up, new transmission mount and brakes on the front ($885 - ouch!!). We also installed a new awning. I know, I know. You all thought we just bought an Archaus Add-A-Room. It worked great but just wasn't quite what I wanted. Doug likes to remind me of the fact that we had the original awning removed in Mexico (my request) when we had body work done and I wanted the new add-a-room........a girl can change her mind, right?? Anyway, this new Shady Boy awning is in one word....fantastic. It took us about 1 hour to install and today we set it up for the first time. That took us 12 minutes, including reading the instructions. Of course, Doug is always the brains of these things and I just try and help out and stay out of the way (both at the same time) This awning weighs 15 lbs, which is about half what the other one weighed. It is also half the length. The material is made from super, lightweight tent-type fabric with tension poles. So sturdy, it's amazing!! 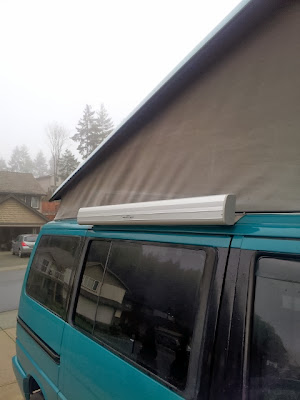 This is a picture without the "down-draft" poles on the corners.
The awning is totally self-supporting at this point, as long as you don't have any wind! 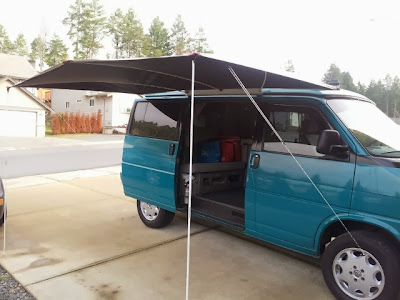 2 minutes later, we added the "down-draft" poles, just to make
sure we understood how to put them on. Check it out on their site:
http://www.shadyboy.com
Doug also had to tackle a new tap in the van sink. It was totally different from the one that we had in there so it required quite a bit of "tweeking" to make it work. He managed to get it just the way he wanted. It will be such a nice change from the old one that you had to work with two hands!! I told you, he is the brains of the organization.

Meanwhile, I also made us a swanky mosquito/screen door for the sliding door. Pretty stoked about it and it turned out pretty good, if I do say so myself! We will show you that one when we use it. We found, previously, that there were many times we wanted to sit during a warm night with the sliding door open, reading, and the bugs would come in so we had to shut it. Take that, you pesky bugs!!!

So, what's the plan you all, anxiously ask?? (.....ha ha ha). We are planning on heading down the west coast of the US, across all the Gulf Coast states (right down into the Florida Keyes), up the east coast, with a detour into Tennessee for Memphis and Nashville (for my music loving husband!) and then through the Carolina's, the nation's capital and out through the New England states. S-U-P-E-R  E-X-C-I-T-E-D!! After we leave the US, we will also be able to cross off driving across Canada from our bucket list. Something we have wanted to do for a long, long time! We will go right back to Newfoundland, via Nova Scotia, Prince Edward Island & New Brunswick. We are instructed by Josh to gather up some Atlantic Ocean in a jar and then when we get back to Vancouver Island, we will go up to Tofino and get some Pacific Ocean and......get ready for it - mix them together!! Watch for the news report on that environmental chaos situation!! Doug has figured that we will put another 20,000 kms on Euri's tires!! We will look forward to seeing many fantastic state parks and utilizing the Harvest Hosts http://www.harvesthosts.com membership that we won from our friends, Kevin & Ruth!! http://www.travelwithkevinandruth.com.
Lots of people ask me, "Will it be hard to leave Gus behind for SO long...." Well, yes, of course it will!!!! Being grandparents is as amazing as we thought it would be. It's like your own kids, only B-E-T-T-E-R!! It will be VERY hard to leave Gus behind (and the rest of our family for that matter). We asked but it seems, strangely enough, that Josh & Kathy don't want him to be gone for that long right now, imagine?!!. It seems he is learning so much now, at an amazing rate and we are going to miss quite a few things while we are gone but luckily we have Skype and we will just have to be content with weekly computer visits until we return. I know there will be some tears upon departure (....all mine) but we will come back with many great stories to share with our kids........
I know we show you tons of Gus pictures (along with Josh & Kathy). Here is an amazing picture of our daughter, Teagan and her hubby, Shawn. It was taken in the Kananaskis area of Banff, AB just a few weeks ago. They are happiest when they are outside, usually in the cooler temperatures of the mountains. They are awesome...love you guys!! 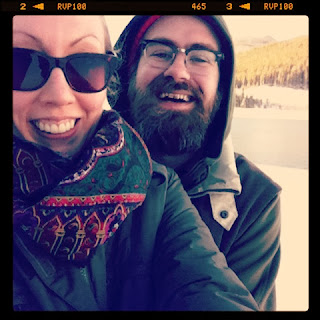 So, that's the "plan", of course, always subject to change. If the weather in the southern US doesn't smarten up and warm up, we may have to head further south!! You will be able to ride along with us, once again, starting soon!! Just remember, once in a while, one of you has to take a turn making the sandwiches!!
Talk to you in a few days!!! Almost time to close up the place here - unbelievable!!
Cheers friends!!
Posted by Doug and Nancy at 22:42