Spent most of the day sorting through the mountain of "stuff" and "debris"  that collects when one is parked for 3 weeks. It isn't that bad but just requires some time spent on the task. All done.....

We rode into town today to say one last good-bye for the year to the town of Melaque. Just to be straight, we are actually staying in Obregon not Melaque but I have come to call this area Melaque which is "technically" incorrect. It would seem counter productive at this point to go back on 19 blog posts and change the name to Obregon so I won't. Much of our time was spent wandering and shopping in the proper little hamlet of Melaque and it is very hard to figure out where the dividing line is. Funny story though, remember the other night when we went to the placing of the stone at the church? Well, our friends here had said that the ceremony was at the "main square" so of course we headed up to what we thought was the "main square". Turns out that the main square that we visited at night was the main square for Melaque. The main square for Obregon was just up the street from us. We have ridden by it 100 times but there is NEVER anything happening at it so we just thought it was an "extra" square. Okay, enough with that. I don't think I have ever used the word square SO many times in one paragraph before......you get my drift. The two little towns are pretty inseparable and lovely.

This morning Mr. Handsome was getting all frisky and friendly and even ran across the campground either playing with or trying to kill another iguana...I would suggest the latter. Doug got a pretty good picture of him (minus some of his head) but then you have seen his head before so it is a bit over-rated! 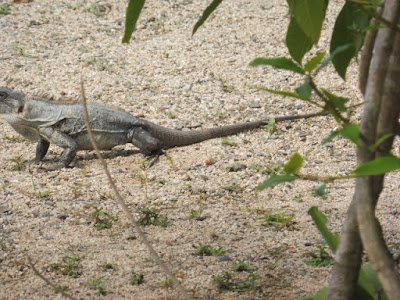 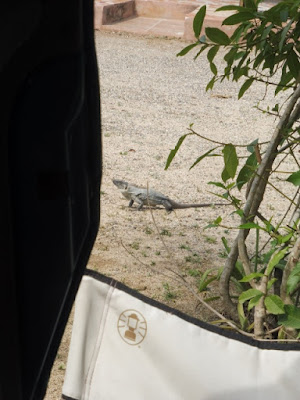 Looking out the van door.... 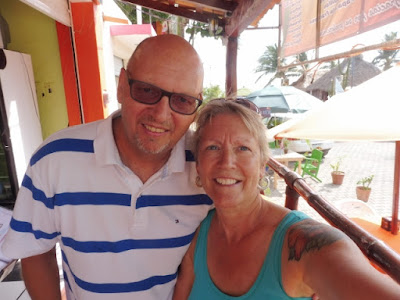 One more trip into Melaque for a limonada. 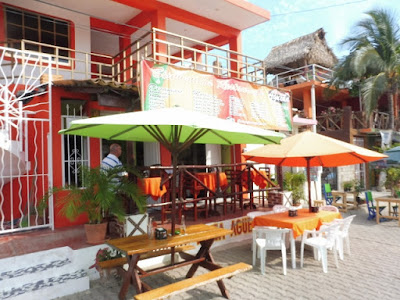 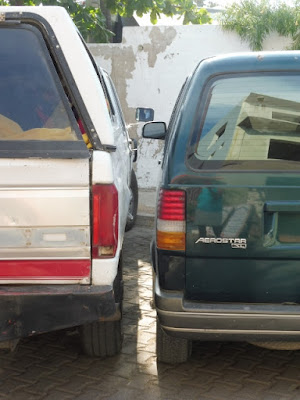 I don't know what this driver was thinking. Funny thing is that there was plenty of room on the other side. This was right across the street from where we were sitting. The mirrors, by some miracle missed each other but I am not sure how the driver of the
mini van will feel when he arrives back at his vehicle. 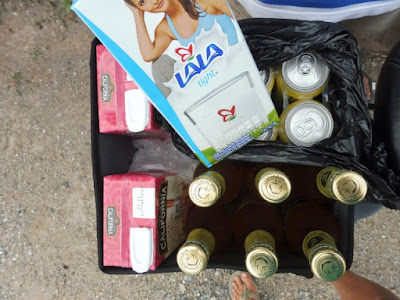 Doug has a foldable basket on the rat-trap of his bike so when we go shopping,
his bike is the "trunk" when it comes to transporting groceries home. I carry some light things in my bag sometimes, but he gets the important stuff. Like for example, the booze!! Here he carried six beer, six Strongbow, two litres of wine, oh, and
one litre of milk. How did THAT get in there? 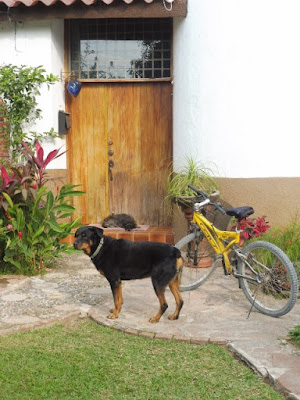 One last shot of Irma's dogs. Brandon the Rottweiler and Vasolina
(like after the movie name "Grease"). She is a terrier type and pretty
much tells Brandon how high to jump....
We took the bus into Barra de Navidad with Dave and Karin tonight and went to one of their recommended restaurants, Marlena's. Super nice spot and what a great view. 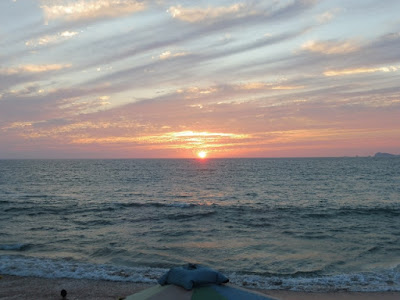 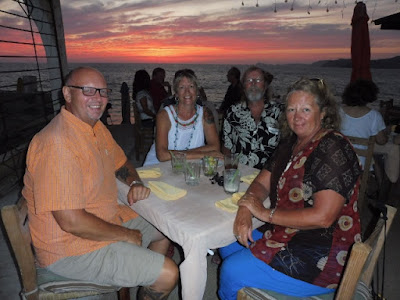 We have had a great time getting to know Karin & Dave.
They are from Kamloops BC. During the summer season, they manage a
fishing lodge at Loon Lake up by Cache Creek. Thank you both for the fun and
we will look forward to seeing you up there this summer!
Check out the website for Evergreen Fishing Resort at www.evergreenfishingresort.ca 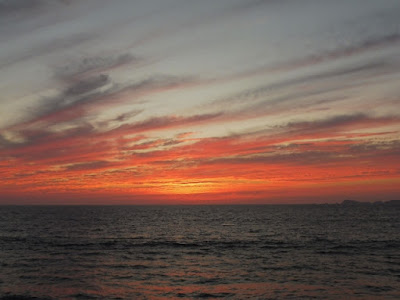 Pretty nice sunset tonight.....
Wow, that's a wrap from OBREGON for us. We have thoroughly enjoyed our time here and look forward to coming back to Irma's next year. Villa Xochipilli is just our kind of place. Those 19 days went by pretty fast, that's for sure.
For everyone who has sent Doug their speedy get well wishes, we are happy to report that, although, still not 100% he is definitely on the road to recovery. Still suffers from a fair amount of rib pain but it will just take time to heal. Thanks for all your kind wishes!!
Tomorrow, as I mentioned, we are on the way, direct to Valle de Juarez. It only takes about 4 hours to get there so it will be an easy travel day. But here's the kicker.....there is NO internet at Chema's campground where we are staying. Now for family there is, of course, phone service so we are still available (like normal) through phone calls or texting. Might be that we saunter into town with the laptops to do a catch up post, not sure. If you don't see me on here for a few days, I will catch you all up on the time there when we get to our next stop which will be La Penita. We will be at La Penita on Tuesday.......until then!
Peace and hope you all have a great upcoming weekend!!
Thought for the Day: It’s never too late to be who you might have been…George Eliot
Posted by Doug and Nancy at 20:51